The 6th IPCC report arrives in a summer dominated by climate extremes and natural disasters.

What is the link between natural hazards and climate change?

It is no longer just a subjective perception: natural disasters are becoming more frequent and are losing their extraordinary character. In the last 20 years, the number of disasters has doubled and scientists claim that about 90% of them are related to climate change in one way or another. A large part of the natural phenomena that cause risk (floods, fires, landslides, etc.) are triggered by extreme weather events such as high temperatures, particularly heavy rainfall or prolonged periods of meteorological drought. In this sense, if the number of these episodes increases, it seems logical that risk-bearing natural events will also increase, to a greater or lesser extent depending on the intensity and frequency of the meteorological phenomena that trigger them.

There is an international agreement called the Sendai Framework for Disaster Risk Reduction, which was agreed in 2015. This is the blueprint for UN member states to follow between now and 2030 to build resilience to disasters.

How do new weather records affect the prevention of natural hazards? The example of flooding in Germany and Central Europe during the summer of 2021.

Weather records across Europe and the world continue to break records as wildfires, hurricanes and flash floods wreak havoc around the world, especially in the Mediterranean basin and southwest Europe. 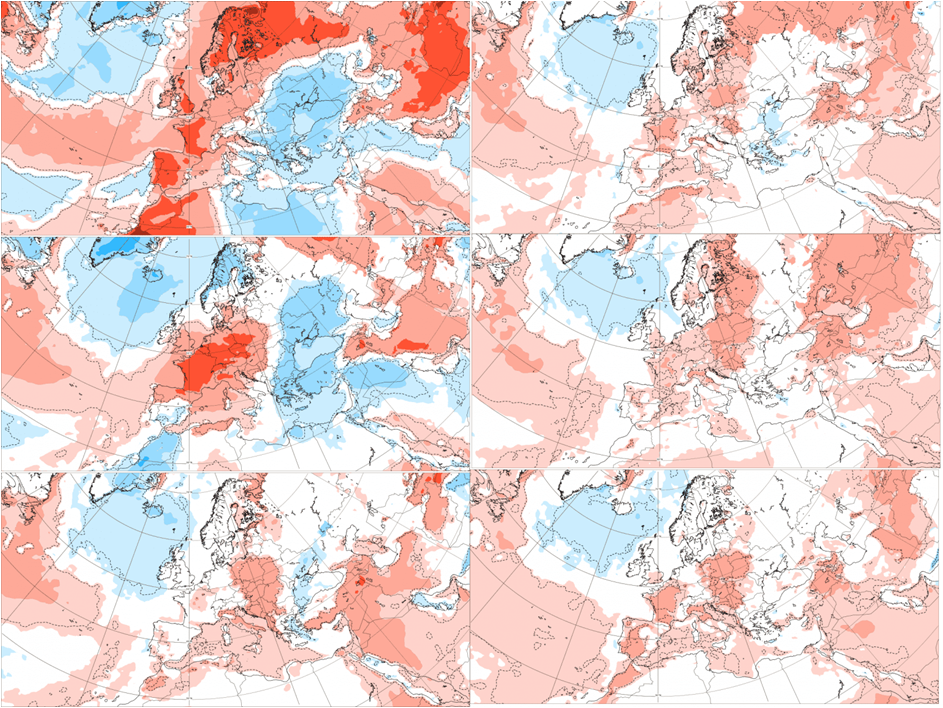 The hurricanes in Asia and the United States, the forest fires in Greece and Turkey, and the floods in Germany and the Spanish Levant highlight the increasing frequency of these phenomena, a trend towards what we could call a new generation of climatic extremes. An obvious example is the floods in Germany, where the heavy rains in the week prior to the catastrophe of 15 July had return periods of more than a century. This has not been seen in recent times in this area.

The fundamental issue is that the areas at risk of flooding were delimited on the basis of old climatology parameters, which predicted return periods of several centuries for rainfall of this magnitude. To find out whether climate change has anything to do with it,  we can look at the evolution of the Extreme Forecast Index developed by the European Computer Centre ECMWF. This index makes it possible to isolate extreme events from the ordinary ones. 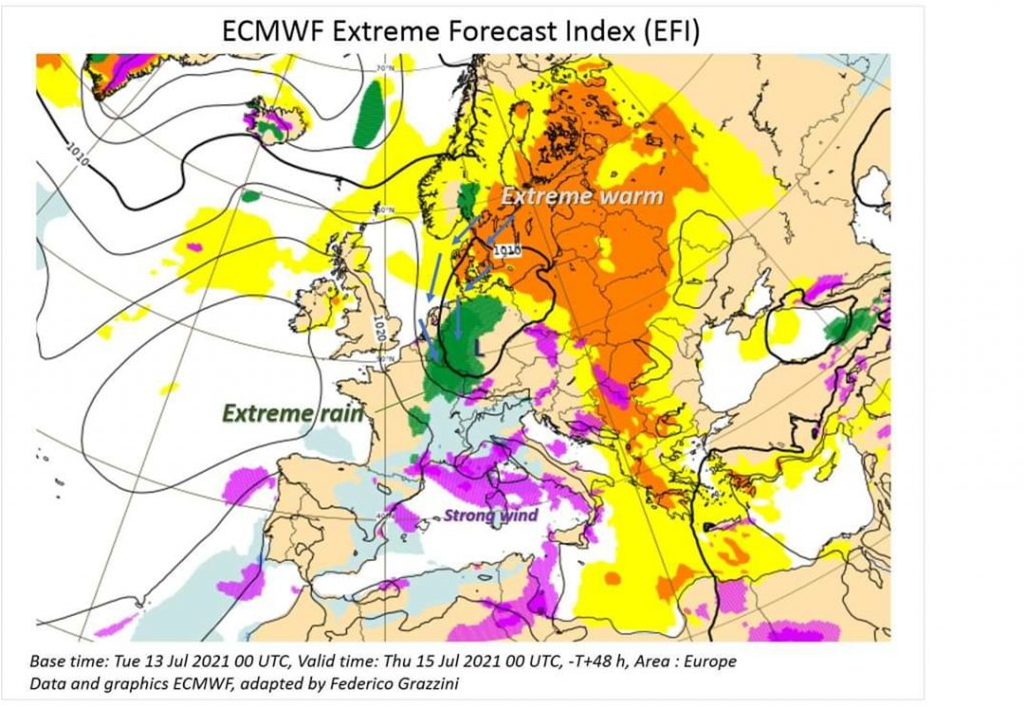 Prolonged thermal anomaly conditions over north-central Europe generated an area of low pressure in the centre that became enclosed and progressively isolated at high altitude, just above southern Germany. This trough, surrounded on both sides by two high pressures, contributed to the transport of large masses of warm air from continental areas of the Baltic Republics towards the lowlands of Germany, Belgium and the Netherlands. These air masses flowed over the surface waters of the North Sea, where a positive temperature anomaly of up to +5°C +6°C above normal averages had been recorded for several days. The influx of these warmer and more humid air masses contributed to an increase in precipitation over central Europe, making it more intense, extensive and persistent. This is mainly due to the fact that a warmer air mass can hold 7% more water vapour for each degree increase in temperature.

This positive temperature anomaly had a significant impact on precipitation intensity over a fairly large geographical area of Europe, with a clear epicentre in southern Germany. In this case, in addition to the cascading effect between a heatwave and an extreme precipitation event, the direct correlation between climate change and exceptional rainfall is evident: the heatwave works as if it were a large accumulator of energy and water vapour. Once the accumulation phase is over, the potential energy is returned in the form of kinetic energy through intense, even extreme storms, torrential rainfalls and strong wind gusts.

The Intergovernmental Panel on Climate Change (IPCC) released its latest report, entitled "Climate Change 2021: the Physical Science Basis", on 9 August. The report, is the Working Group I's contribution to the IPCC's Sixth Assessment Report, consists of a total of 3 parts accompanied by an executive summary. From this physical basis document, which will be progressively completed with the remaining documents and some key messages. 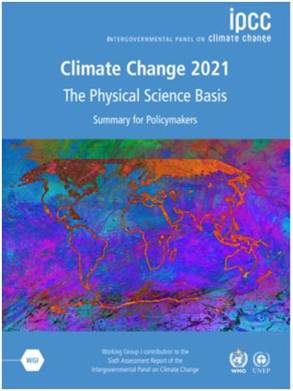 For the first time,  a scenario with the goal of limiting warming to 1.5°C has been explored, added as a consequence of the Paris Agreement.

It is also the first time that a chapter is dedicated to rural areas (chapter 9), which recognises their importance and special sensitivity, although there is still no consensus in the literature on certain factors that can increase or reduce vulnerability. Its coordinator, Marta G. Rivera-Ferre of the University of Vic, has pointed out that there is a certain lack of definition (academic and administrative) as to what rural areas are, and therefore there is an analytical difficulty in "assessing" them. Rivera-Ferrer also stressed the need to evaluate economic impacts with tools that go beyond the monetary. This is the case, for example, of the valuation of the impact of climate change on the ecosystem services provided by rural and mountain areas.  Finally, the coordinator also underlines the difficulty of distinguishing between impacts caused solely by climate change and those caused by human action in complex socio-ecological contexts.

The report is structured in 12 chapters complemented by a novel interactive scenario atlas and a set of 11 regional fact sheets. These fact sheets are a more didactic and informative sub-product, with regionalised information on some key ecosystems and regions. The fact sheets include a specific one on the world's mountain areas, summarising the new scientific evidence on the physical basis of the impact of climate change in mountain regions.

Finally, in chapter 11: Weather and climate extreme events in a changing climate and chapter 12: Climate change information for regional impact and for risk assessment, updates the knowledge base on the effect of global warming on the behaviour of climate extremes, and how this translates into an intensification of natural and climate risks, of different intensity and magnitude depending on the region.

This report is undoubtedly strong evidence of the irrefutable and unequivocal warming of the climate system, and of the clear human influence on this evolution. It also stresses that many aspects of climate change and associated impacts will continue for centuries, even if anthropogenic greenhouse gas emissions are stopped now and completely. Scientific evidence corroborates that the more we alter the climate, the greater the risk of severe, widespread and irreversible impacts.

Climate change risks depend on cumulative greenhouse gas emissions, which in turn depend on annual emissions over the coming decades. The report stresses that adaptation and mitigation are complementary strategies to reduce and manage the risks associated with climate change, but neither is sufficient on its own.